Growth of nucleuses happens as a result of migration of liquid atoms to them. However, in a lot of cases, it doesn’t come to this one-faced atoms transfer. Atom, which belongs to a liquid, not necessary stays on closed-packed faced when gets on it. The possibility of its returning to liquid depends on how strongly it is held by adjacent atoms. Single atom (fig. 1) 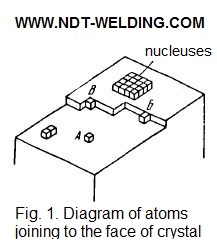 is badly connected with the face and can come back to the liquid. This can be also with grouping from two or more atoms, settled on the face. The atom stands firm in position B and even better – in position C. Atoms can be strengthened on flat surface in the case, if they form aggregate of certain (critical) size. These groups are called two-dimensional nucleus. Atoms are held firmly on the surface of crystal by joining to their edge in positions of B and C type, and also atoms return to liquid more seldom and the layer grows faster. Owing to new layer increasing on smooth surface of crystal two-dimensional nucleus will originate again, etc. Thus, displacement of crystallization front happens not continuously, but with pauses, necessary for origination of two-dimensional nucleus.

Let us suppose that on idealized atomically smooth surface of the crystal the area of new layer occurred, which consists of m atoms. Changing of thermodynamical potential during this is shaped by decreasing of chemical potential by Δμ x m owing to atoms transferring from liquid to crystal and by increasing the potential, conditioned by surplus energy of atoms, located on the edge of two-dimensional nucleus.

Difficulties connected with origination of two-dimensional nucleuses experience, apparently, only close-packed atomically-smooth faces. The necessity for two-dimensional nucleuses doesn’t exist anymore, if there are dislocations or twin crystals on the crystal surface. Dislocations (if displacement vector is not in the flatness on face) can present continuous source of stages, convenient for atoms strengthening.