When conducting tensile tests the beginning of yield point is marked with decreasing of apparatus values or recording device. Yield point can be determined by observing and registration these type of stress decreasing. This method is called method of testing machine lever dropping, which indicates that subject sample reached elasticity limit.

At the moment, when this elasticity property appears the plastic strain of metal increases with such speed that stress relief happens faster of their origination. When plastic strain begins under conditions of room temperature, it is called cold working (hard-drowning). This effect gives increasing of strength and hardness to the metal, and the metal is called hard-drawn. That is why

fluidity remains until the metal doesn’t become hard-drawn up to the level that it requires applying additional stress for further lengthening. This implies that the curve begins growing nonlinearly.

The stress and strain continues to increase with different speeds before certain maximal stress level will not be reached. This level is called maximal stress or ultimate tensile stress. One can see the point on fig. 1, in which maximal stress is reached and after which noticeable decreasing of stress begins. 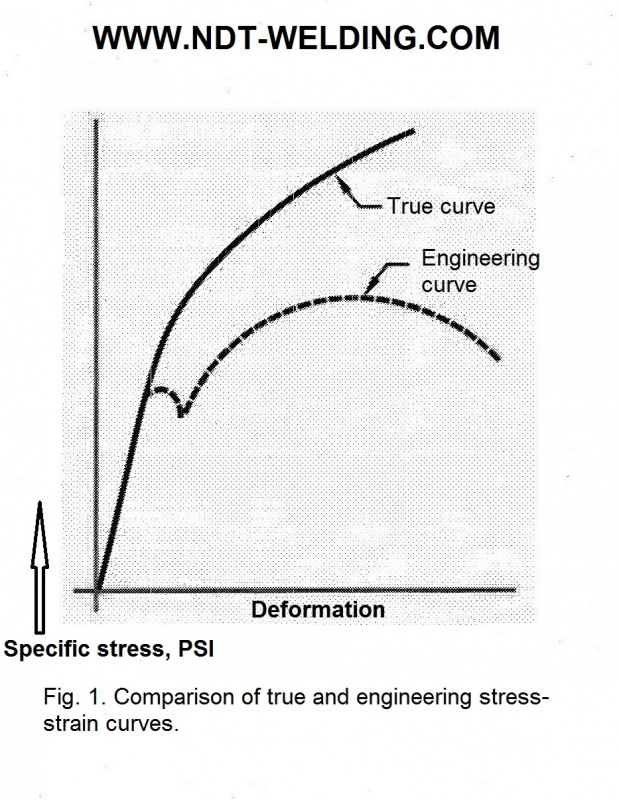 Though strain growing continues (engineering curve). This happens as a result of section narrowing on the section, where the origination of neck begins, as a result of which actual area of section, which resists applied stress, is less than initial area. Since stress is calculated on the basis of initial area value, it can seem that the stress decreases, but in actual fact it continues to increase, if examining its value expressed in pound-forces for square inch.

If during tensile test conducting someone will continuously calculate stress on the basis of actual area that resists to applying stress, one can build true stress-strain curve. Two curves are shown on fig. 1: true curve and engineering curve mentioned above. One can see that the sample deformation increases with stress increasing. It is evident on true curve that destruction happens both under conditions of maximal stress and in tye point of maximal strain.