Metallurgical processes, occurred during point fusing, in spite of short-term of their behavior, are reproduced, apparently, with the same completeness level, as during real production facing.

It is known that during metal fusion, which endures structural changes of martensitic type, tangential stresses of significant magnitude occur in fusion zone, during which relaxation microcracks occur. That is why stressing the point by torsion gives additional possibility for more detailed studying both the phenomenon of detained destruction itself and strengthening

Two-position experimental machine was constructed and made for experimental examination of the method. The kinetic scheme of the machine is shown on fig. 1. 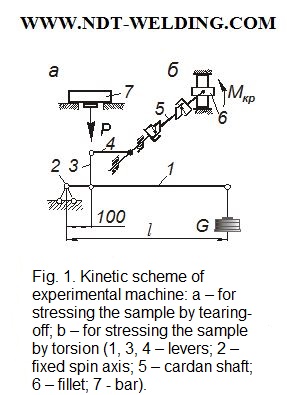 The comparative evaluation of susceptibility to chipping-off origination was made for two steel grades. Fusion was executed using flux cored wire that provides fused metal chemical composition, indicated in table 1.

As the index of fused metal susceptibility to chipping-off origination the maximal (critical) stress is taken, during which sample destruction doesn’t occur for 20 h.

Experimental results are shown on fir. 2 for alloys of two grades. It is obvious that during torsion and under conditions of tearing-off the time before sample will destruct depends on magnitude of applied stress, at that with decreasing external stresses it increases. 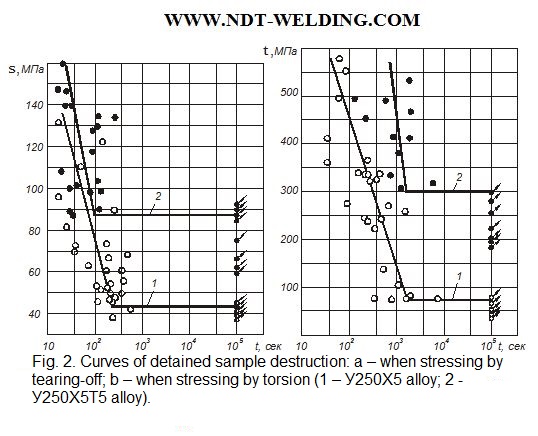