For a crack in a metal to expand under the influence of the stretching forces, it is necessary to spend some work on the plastic deformation’ flowing along the forming crack’ borders and on the forming of new surfaces. D. Irwin and E. Orowan proposed to introduce the value of G that would express the plastic deformation’ work at the crack’s mouth with its advancement at the moment of the motion start expressed in a unit of length. The G value can be expressed as a unit of force per a unit of length (N/mm) or, as it is the custom in the fracture mechanics, as the units of work per a unit of area (J/mm2).

The G value depends on the material, the sample’s geometrical dimensions and on the crack’s length.

When a laminar sample with the crack having the initial length of lо (Fig.1, а) is stretched, the crack’s length will grow as the load P grows. In the process, the G value will increase, which is explained by growing resistance to the crack’s propagation R. The resistance to the crack’s propagation R can be depicted in the form of a curve, the appearance of which depends on the type of the material (Fig. 1, b, c). At a certain moment, an unstable (spontaneous) growth of the crack sets in, which is indicative of the G value having reached its critical magnitude that is denoted as Gс. The breaking instability appears at the point where the straight line originating at the coordinate basic origin touches the R curve (Fig. 1, b, c). 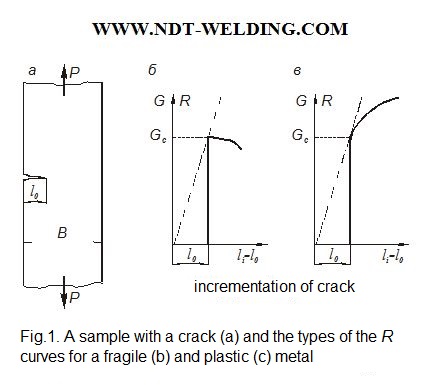 The critical value Gс depends on the length of the crack and on the sample’s thickness (Fig. 2); it reaches its minimum at a certain thickness δс at which the plane deformation condition is realized. The minimum amount of energy necessary to provoke the unstable crack growth is designated with the G1с symbol. It is known that the linear theory of elasticity gives unequivocal correlations between the stress, the deformation, and the energy. Therefore, the energy fracture toughness criterion Gс (G1с) has an analogous criterion that is expressed through stresses. D. Irwin proposed to associate the energy criterion with the stressed state at the crack’s tip, using the so-called stress intensity factor K that characterizes the magnitude of the force transferred through the crack tip area. 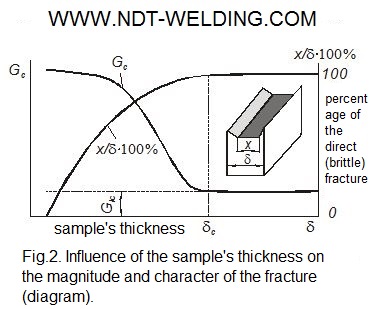 The stress intensity factor value depends on the material, its structural status, the tested sample’s thicknesses (similar to the Gс relation shown on Fig. 2) and the force’s direction relative the crack’s plane. Upon the tear, the factor’s critical value will be reached at a certain sample’s thickness; it is designated as К1с. The critical value of the stress intensity factor is the main criterion of the material’s fracture toughness; it allows solving many practically important tasks related to selecting a material for the metal structures characterized by high materials consumption. The К1с and G1с values are related by the simple mathematical relation (for the plane deformation conditions):

Where: E  is the material’s modulus of elasticity (MPa);

v  is the Poisson ratio.

Despite some dimensionality uncommonness of the К1с value (N/mm3/2 or MPa), it can be identified with the stress acting in front of the crack’s tip along its propagation line at the distance of 1/√2π  from the tip. In other words, if at some moment of the stressing we know the value of the К1 factor, then, by dividing it by 1/√2π (≈2.5), we can obtain the value of the stress at the point that is located at the distance of 1 mm from the crack’s tip in the direction of the crack’s expected propagation.