For each material, tested for tensile tests, this curve has constant slope. This slope is called elastic modulus.

Henceforth the deformation starts increasing faster than strain, and it means that under conditions of this stress the metal

stretches in greater extent. The end of elastic work and beginning of plastic (inelastic) or residual strain is characterized by this change. Point on the curve, signifying the end of linear characteristics, is called elastic limit or proportionality limit. If stop stress action in any moment before reaching this point, the sample will return to its initial length.

A lot of metals are susceptible to sharp transfer of their area of initial elasticity. It can be seen on fig. 1. 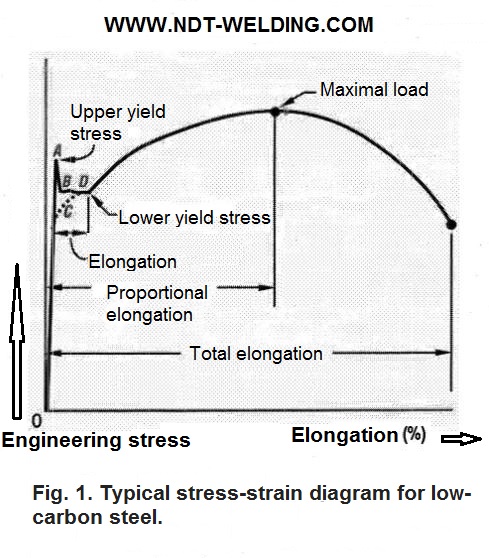 Stress and strain don’t only stop being related by linear dependence, the stress can practically drop or stay the same, and deformation will grow. This phenomenon is typical for fluidity state of plastic steel. The stress increases and reaches some maximal limit, and then drops down to certain lower limit. These limits are called upper and lower yield stress. Upper yield stress is certain stress, under conditions of which the significant growth of strain is observed, or plastic deformation not accompanied by stress increasing. Then stress decreases and remains practically constant at the level of lower yield stress, and strain continues increasing during so-called lengthening on the yield stress.